At the beginning of July 2015, I left France and sailed to Alassio in Italy (The last time I was here was 38 years ago when I drove down to Rome, camping along the way with my girlfriend!). Three days later I sailed to Savona….the winds in the Gulf of Genoa are very light in summer and short distances are better. The cruising chute is very useful too!

The two guys in the marina, Marino and Giovanni, not only told me of a good bar to go to early evening, but were there themselves and bought me a beer!….is this the best marina in the world? Great old city though, and with the OTHER Sistine Chapel.

A lively 20nm sail to Porto Antico in Genoa…and the best Maritime Museum yet.

For the first time I called to book a mooring in a marina….Portofino. I couldn’t get Saturday and Sunday because Dolce & Gabbana had a private showing and Portofino was full, but I did get a mooring for Monday and Tuesday. It was, by far, the most expensive marina yet but such a special place to be.

From Portofino I sailed to the Bay of La Spezia and anchored up for the night near to Le Grazie. I was able to get an early start in the morning and a good wind to Marina di Pisa. I read that there’s more to Pisa than just the leaning tower, but I was disappointed with the city of Pisa….but the cathedral, duomo and the tower are fabulous.

From Pisa I sailed first to the anchorage at Porto Baratti and then the next day to another anchorage in a bay near to Porto Ercole. At Porto Ercole I arrived early enough to have a swim in the sea before dinner….this was the first time I had dived off the stern of the Wildbeast! Then up early again to sail to the marina Riva di Traiano at Civitavecchia. The marineiro told me that it is the hottest summer ever in Italy….in the afternoons it has been way over 30 degrees!

Another good sail down to the marina at Lido di Ostia on the coast near Rome. Friend Dawn flew out from the UK the following day. We spent two days in Rome….Colosseum, Pantheon, Roman Forum, Sistine Chapel and the Vatican Museum. We also saw a fine example of Roman scaffolding at the Fountains of Trevi!

The harbour at Anzio didn’t answer my call when I arrived early evening so I anchored just outside the harbour, and spent the night being rolled from one side of the bed to the other! In the morning the harbour still didn’t answer my calls so I motored a mile to the next marina. I got the bike out and cycled to Beach Head War Cemetery at Anzio….all very special.

It was a fabulous sail down to San Felice Circeo, a great old town and ridiculously expensive marina!

Another good sail to Gaeta, a great “nuova latina” city and a great marina. On the first evening I met Peter, Denice and Carol again, after first meeting them in Lido di Ostia.

I left Gaeta earlier than normal so I could gain a few miles motoring. The wind picked up as normal and I had a good sail through the Canale di Procida and up into the Golfo di Pozzuoli. Eventually I anchored at the Isla di Nisida and the next day I went to the marina at Pozzuoli in readiness for the boys arriving on Sunday. What a mini-adventure we had! Two days in Naples, a sail to Pompeii and a day looking around the fabulous ruins, a sail to Capri and a night at anchor on the south of the island, a sail back to Pozzuoli and a last afternoon in Naples. The next stop was going to be Amalfi, but the harbour was full so I continued for another hour to Salerno. There was no answer on the radio so I anchored up in the city waterfront. The next morning I helped a fisherman to unsnag his net from my anchor, and then set off south. I sailed down to Acciaroli only to find it full, so I anchored up with 10 or 12 other yachts just outside the harbour…..is it a national holiday or just a busy weekend in Italy in August? The next day I pulled up the anchor and set off sailing down to the Golfo di Policastro, and found that Scario had a space in the harbour. Scario is very pretty, but ridiculously expensive to moor. I stayed for just two nights and then motored for an hour across the bay to Sapri. I anchored for two nights in beautiful clear water for a lazy time of swimming, reading the Modigliani Scandal from cover to cover and practising Silent Night on the guitar!

I left Sapri hoping to sail to Cetraro, but the wind was pathetic and “on-the-nose”. So I motored the whole way, and promised myself that the next passage down to Tropea would be wind-assisted! Well, it wasn’t! There is a massive high pressure and little or no wind at the moment. Anyway, seeing the old town of Tropea compensated for the lack of wind.

But I have two boat problems…..I broke the engine ignition switch! I glued it back together and it seems fine but another one is being sent from the UK. At the last anchorage the windlass sounded poorly so I pulled the anchor in by hand. With support from the workshop in the marina and Kildales in Hull I replaced the windlass. Anyway, more important issues….last night I had a beer with Mike off the gaff-rigged boat, Sea Eagle. Sixty-nine years old and single-handing down to Turkey! Then Keith and Suzy joined me alongside the quayside, and then ……………… . Sally and Moira flew in from the UK to begin our passage across to Greek waters. First off though, we left Tropea and motored through the Messina Straits to Reggio di Calabria. Since the end of June I have visited sixteen places on the west coast of Italy, and on 14 September 2015 we left Reggio di Calabria to sail 240nm across the Ionian Sea…..48 hours later after some fabulous sailing we arrived in Argostoli on the island of Cephalonia….mostly, thanks to Sally and Moira! 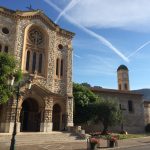